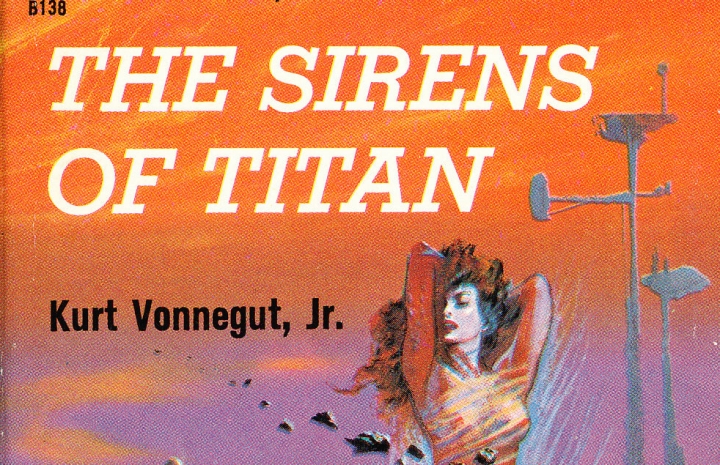 No one really compares to Kurt Vonnegut, do they? His voice was so unique among his peers that it became almost instantly recognizable. And it first fully took shape in 1959’s The Sirens of Titan.

Following on the relatively unremarkable heels of Player Piano, his 1952 debut, The Sirens of Titan is brimming with the sharp wit and dark humor for which Vonnegut has come to be known.

There have been few authors capable of grinding laughter out of human misery, indecency, and cruelty the way that Vonnegut did and Sirens is no exception. With a wink at all the violence and bloodshed that has arisen at the hands of religions claiming a loving God at their head, Vonnegut presents a united world, free of war, wherein the dominant faith is the Church of God the Utterly Indifferent. It is a joke that only Vonnegut could execute – which he does, brilliantly.

To those familiar with Vonnegut’s work, it will come as no surprise that The Sirens of Titan reaches far beyond comedy and, as it were, Earth. Vonnegut was too well respected to ever be fully branded with the unfairly maligned label of ‘science fiction author’ and yet Sirens has more sci-fi elements than many books bearing that stigma: due to a space phenomena one of the book’s central characters materializes intermittently across the universe, scenes take place in Martian bootcamps and beneath the surface of Mercury, and Vonnegut even introduces his favorite alien race, the Tralfamadorians. (And let us not forget the presaging of “Harrison Bergeron”-esque counterweighted equality.)

Sometimes it becomes clear as you’re reading a book, as each and every little detail fall brilliantly into place, that you’re reading the work of a master. The Sirens of Titan is that kind of book. There may be better places to start if you’ve not read Vonnegut before – Sirens takes a little bit of gearing up before its phenomenal conclusion – but it would be impossible not to recommend it. It’s a tightly packed masterpiece that contains a little bit of everything. What more could you ask?

One thought on “The Sirens of Titan”