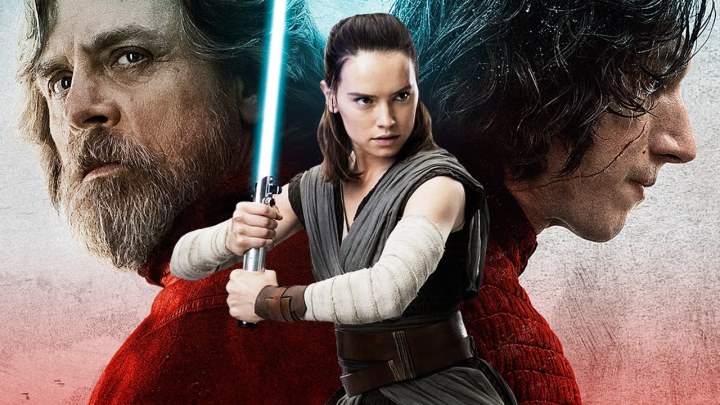 (SPOILER ALERT. This post, written after only one viewing of The Last Jedi, is absolutely spoilerific. I’m going to ruin the movie for you if you haven’t already seen it, is I guess what I’m saying. Continue at your own discretion.)

As The Force Awakens drew to a close, Rey stood atop the scenic island cliffs of Ahch-To, her arm outstretched towards Luke – lightsaber in hand – offering him his old weapon, his lost power, the life he had abandoned. When The Last Jedi picks up this narrative thread, Luke carefully accepts the weapon, cradling it in his (semi-robotic) hands. It’s a powerful image: the old master weighing his failures and successes, hosting an internal debate over whether or not to once again take up the legacy that had made, and subsequently destroyed, him. Then, with an annoyed nonchalance, he flings the damn thing over his shoulder and stomps away.

That this is all played for laughs isn’t the problem. (Laughs are good! Who doesn’t like laughs?) The problem is that this scene is representative of the narrative and emotional development of every character in the film – save Poe Dameron – which is to say that any meaningful development is casually tossed aside in favor of taking the path of least resistance, the easy way out. Let me explain.

At the outset of The Last Jedi, Poe is a headstrong, willful gunner. He doesn’t play by anyone else’s rules! What a rebel. He’s also lovable and successful, so his colleagues and friends are willing to follow his lead; he’s earned their trust. But then we see that Poe’s inflexibly aggressive leadership leads to an awful lot of pain and death for those people that he ought to be protecting. More importantly? Poe sees it too. Across the story he learns to be a better leader and, while his climactic “I’ve learned to look for alternate routes” soliloquy is a little heavy handed, it remains an effective resolution to his character arc because it’s earned. He fucked up, he learned, he changed.

Based on what’s revealed of Luke’s history between the original trilogy and this current slate of films, his character arc in The Last Jedi should be rich, deep and moving. It should also drive the stories of Rey and Kylo Ren (née Ben Solo).

Once the savior of the galaxy, Luke founded a Jedi academy only to find that his star pupil – Kylo, who happens to be Luke’s nephew – carried the capacity for incredible evil inside him. Motivated by fear of what that evil might achieve, Luke almost falls to the temptation to murder his nephew (!!!) only to be stopped at the last moment by his own immense shame. When Kylo sees Luke standing over him, lightsaber drawn, he destroys Luke’s temple and tumbles down into the dark side before Luke can explain what had happened. This whole affair, spurred on by Luke’s fear, should be truly tragic, especially given how important Luke’s ability to overcome his fear had been in his (original trilogy) character development.

From this plot point we should have seen two powerful storylines emerge: Luke’s reconciliation with Kylo and Luke’s decision to train or not train Rey. Both of these storylines are explored in The Last Jedi but neither arc overcomes any real difficulty. The growth that we’re meant to see isn’t earned because these relationships are hamstrung by a failure to “show not tell.” To wit, the entire Luke-and-Rey passage includes exactly two interesting moments. The first: Rey shows up and does nothing but follow Luke around, talking at rather than with him (“We need Luke Skywalker!”), until Luke finally relents on his only remaining principle (“No more teaching Jedi!”) and gives her an extremely rudimentary lesson into what, exactly, the Force is. It’s almost an effective moment because the characters are interacting with one another in a real manner, doing something that gets beneath the surface and inspects the challenges created by the collision of their two disparate worldviews. Unfortunately the scene still falls flat because neither character emerges from this interaction changed in any meaningful way. Later, they fight, essentially because neither of them is willing to change. This could be interesting! Two characters who need one another to grow (Rey needs a mentor, Luke needs redemption post-Kylo) but are unwilling to compromise; let’s explore that! Instead, Rey leaves. She and Luke never interact again.

Luke’s confrontation with Kylo is rightfully given a climactic role in the story. It’s a chance for these two troubled characters, whose actions are driving this whole damn film, to resolve their intense conflicts (the whole “You’re my uncle and teacher but you tried to fucking kill me!” thing comes to mind). When they finally come face to face, Kylo lobs up what should be an easy one by proclaiming his worldview to his old teacher (“Evil will win and the Jedi are done!”) but when given the chance to explain himself and actually try to impart some wisdom on Kylo (again: his pupil and nephew), Luke instead stays committed to being the world’s shittiest uncle-teacher combo and says, “Nope! You’re wrong!” The whole exchange could have been dramatically aided by dialogue as simple as, “I’m sorry, Ben. I never meant to hurt you. I was afraid of your power.” Instead, Luke limbos under a lightsaber and turns out to be an apparition. So yeah, kind of an empty resolution. (It’s worth noting here that Kylo’s final interaction with Supreme Leader Snoke is no more meaningful than what he gets with Luke.)

All of this non-development is stretched over two and a half hours (in fairness, other things do take up some screen time: Benicio del Toro! Porgs! Rose!), during which poor Finn gets essentially no character development at all and is instead sent on a doomed video game fetch-quest just so he has something to do. He doesn’t even get to make the decision to kill or save Captain Phasma who, after an impactful fight, falls into a fiery pit. Ugh. He and Poe don’t even get any quality banter time in this one. Poor, poor Finn.

The Force Awakens was not a great movie but its opening passage (which I’ll define as everything prior to Han’s arrival) established a dynamic set of engaging leads for this new trilogy. The Last Jedi provides jokes and fights – your traditional blockbuster entertainment – but it does little with characters who had exhibited such joyful, exuberant potential. I’ve only explored a few avenues of (stunted) character growth here, but it’s not really necessary to go any further. By the time The Last Jedi ends, only Poe has materially changed since the film’s outset (although Rey is better at lifting rocks now, so that’s fun) and this failure to develop its main cast of characters in any meaningful way may end up being, for me at least, The Last Jedi‘s underwhelming legacy.