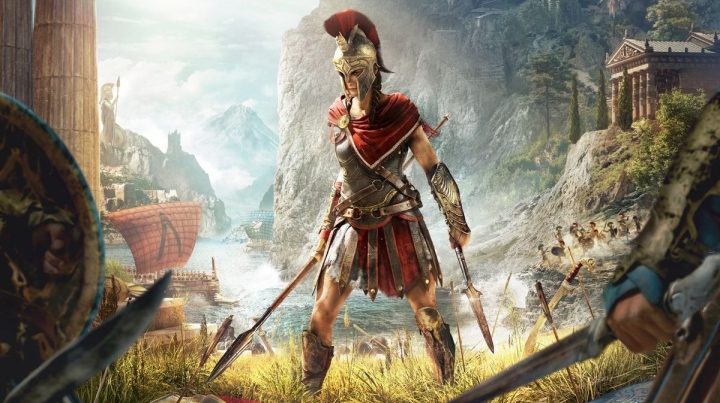 Assassin’s Creed Odyssey is a game almost exclusively about violence. The game’s narrative, so far as I’ve experienced it, is about the violence that the player commits as an adult after being victimized by a terrible instance of violence as a child. Considering all that, the fact that I’ve quickly come to love Odyssey is surprising because, for me, the game’s violence—which, again, is arguably the entire game—is actually its least appealing component.

As I’ve grown older and as games have become more and more realistic, video game violence has seemed less and less appealing, to the point that it never even occurred to me to play Assassin’s Creed Odyssey, a game whose gameplay could easily be described as a mass murder simulator. Then the reviews starting pouring out and positioning Kassandra, one of the game’s two choices for the player-character, as one of the most irresistible characters in gaming.

Here’s the thing, though: No matter how charismatic Kassandra was or is, a likable character was never going to get me to spend a lot of time with a game whose fundamental gameplay loop wasn’t enjoyable for me. Well, but here’s the other thing: Not only is Kassandra absolutely charming as fuck but the gameplay loops of Odyssey are more than just enjoyable; they’re outright fantastic. When I begrudgingly coughed up a few dollars (and a couple of trade-ins) for a heavily discounted version of Odyssey—a decision made almost exclusively because of the aforementioned reviews and my academic interest in ancient Greek society—well, I was not anticipating such a high rate of return on my investment.

So how does a game about killing a staggering amount of people win over someone whose gaming preferences are purportedly anti-violent? It turns a series of stabby deaths into a series of systematic puzzles. (God, I love a good video game puzzle.) And then, going one step beyond that, it allows for much of the violence at hand to be essentially automated, removing the player by an incredibly important degree from the carnage. It’s also probably worth noting that Odyssey, set as it is in ancient Greece, relies on swordplay for its combat rather than on a phalanx of firearms. As a wise man once pointed out, there’s something more graceful and refined about combat with a blade than combat with rifles.

Odyssey presents two means of combat: The first is to blunder into any given encounter, sword swinging, and attempt to bludgeon your opponent(s) to death. I do not recommend or enjoy this route which quickly devolves into the type of timing-based, pseudo-button-mashing that left me disappointed with Shadow of Mordor, a violent game that I felt compelled to explore due to my deep and abiding love of all things Middle-earth. Odyssey’s second combat option is to remain in hiding for as long as possible, sometimes indefinitely, and to thereby learn the routines of all your targets and then, utilizing a host of tricks and abilities, to isolate and pick them off, one by one.

Sure, there’s still violence here. Of course there is. I used the phrase “mass murder simulator” earlier in this piece, for God’s sake. But the violence of Odyssey, so long as I’m sneaking through the shadows and manipulating the patterns of my enemies, never really feels like an active part of my playing experience. Instead, the gameplay loop becomes “view target, identify target’s patterns, exploit weaknesses in target’s pattern while remaining hidden.” Once my planning and trickery come to fruition, I press a single button and Kassandra does all the killing—all the violence—on her own with no further input from me. Then it’s on to the next target. It’s a brilliant loop and an even more clever bit of misdirection for players like me who aren’t actually interested in slaughtering a million nameless grunts.

By reframing the game’s violence so that I feel like I’m not murdering the entire population of Athens so much as diagnosing and solving an ever-changing series of puzzles—and by virtue of Kassandra being possibly the most engaging video game protagonist this side of Commander Shepard—I’m thoroughly hooked on Odyssey, violence and all.