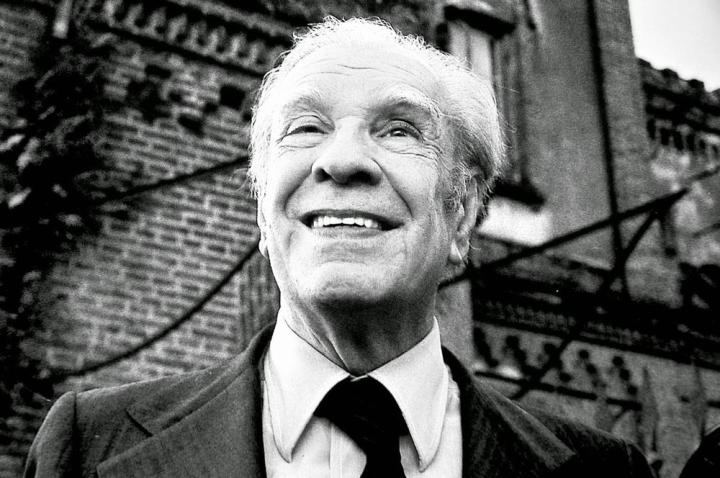 In his short story “Pierre Menard, Author of the Quixote,” Jorge Luis Borges—that miraculous, mind-fucking Argentinian—proposes an unusual premise. The titular Menard is shown to be obsessed with unusual literary feats and, as such, he decides to take it upon himself to rewrite Cervantes’ classic, Don Quixote. He’s not planning to translate the book or simply copy it. He’s not planning to write a new, modern version of it. No. He’s planning to write it. As in, create circumstances in his life that drive him to write a new book. And that new book is exactly, word for word, Don Quixote. I’ll let the story’s narrator explain:

“Those who have insinuated that Menard devoted his life to writing a contemporary Quixote besmirch his illustrious memory. Pierre Menard did not want to compose another Quixote, which surely is easy enough—he wanted to compose the Quixote. Nor, surely, need one be obliged to note that his goal was never a mechanical transcription of the original; he had no intention of copying it. His admirable ambition was to produce a number of pages which coincided—word for word and line for line—with those of Miguel de Cervantes.”

That is an insane plan. Obviously. Writing a book that already exists, let alone one that was written hundreds of years prior in a completely different world and culture is, as plans go, not only ludicrous but also seemingly impossible. At the risk of spoiling an 80-year old story that you’re probably not going to read anyway: Menard doesn’t fully succeed. But, incredibly, he does partially succeed. Through his labors, he generates a few chapters that happen to be identical matches to those of Cervantes. That seems impossible and it probably is but—as with most of Borges’ work—the possible here isn’t meant to reflect the tangible world at hand but rather the intangible world of our minds, the world of imagination.

The narrator of Borges’ story notes that the few chapters of the Quixote that Menard managed to write are much richer and deeper than Cervantes’ original, going so far as to call them “perhaps the most significant writing of our time.” Further still, in one hilarious passage, the narrator compares two identical passages—one from Cervantes and the other from Menard—and critiques them, heavily favoring Menard’s version. 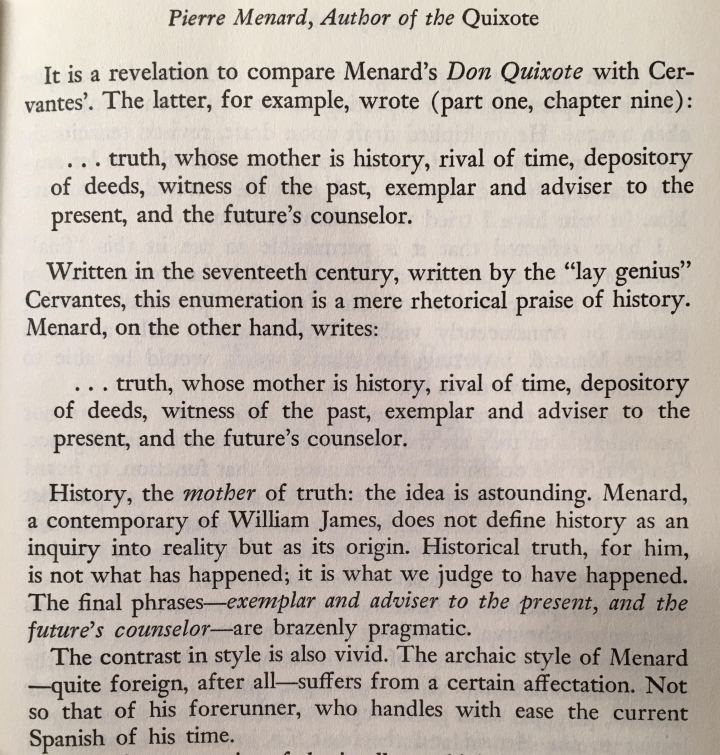 This is, in a perfectly Borgesian way, a joke. But the narrator’s position is also fascinating and—this is the wild part—kind of true.

Through the view of the dead author theory, authorial intent and circumstance is meaningless. The author, in fact, need not exist. It is only the written word, alone and with no circumstantial concerns, that matters. That’s a fine literary theory but, especially in today’s hyper-connected and endlessly cataloged world, it may not be a practical one. Even as Borges wrote “Pierre Menard” in 1939—and as Roland Barthes introduced the dead author theory in 1967—it would have been nearly impossible to consume a piece of art without absorbing some amount of related external information, even if that information—the era of the author’s life, for instance—seems relatively minor in nature. It’s hard, then, to ignore the vast differences between the lives of Cervantes and Menard which can’t help but make a difference in the reading of their respective and identical texts. Passing by a host of relevant differences between the two authors, a focus on two is sufficient to provide illumination: date and place. Cervantes published Don Quixote in Spain during the early 1600s while Menard was attempting to write that selfsame book in France during the 1930s.

It is important too to note that Menard was not remodeling himself into a facsimile of Cervantes; instead, his plan revolved around “continuing to be Pierre Menard and coming to the Quixote through the experiences of Pierre Menard.” And so the narrator’s gushing praise comes more clearly into focus: if Menard were to recreate—in France during the 1930s—a piece of text that was the exact duplicate of certain portions of Cervantes’ Don Quixote—a book for which Menard has shown no particular personal affinity, having described his recollection of it as vague and “simplified by forgetfulness and indifference”—it would be a miraculous achievement. How could readers of Menard’s Quixote, being themselves contemporaries of Menard rather than of Cervantes, not consider the scope of that achievement in their reading? If the experience of reading carries the reader from an author’s words through a world of fiction, doesn’t that experience necessarily change and move if the author is supplanted?

Part of Cervantes’ great accomplishment with Don Quixote, as with any author of successful fiction, is the creation of a living, breathing world that is, of course, not real at all. But what of Menard? He has created a world within a world, shaping his own life into a fiction that births yet another fiction, the latter one presaged before the formation of the former and steering the whole affair toward its own conception. Is this literary time-travel a greater achievement than Cervantes’ work of pure, clean fiction? Borges’ narrator would argue that it is and the argument is surprisingly simple: writing a book is hard; writing someone else’s book entirely on your own is much, much harder.

The story’s narrator suggests that all this hardship does not necessarily confer lasting meaning, noting that “there is no intellectual exercise that is not ultimately pointless.” Similarly, Menard himself burned the drafts of his Quixote and “took care that they not survive him.” Despite all that, the narrator attempted to save those fiery drafts, Borges chose to write about the whole convoluted premise and here we are, all these years later, inspecting the entire mystifying affair. Intellectual exercises, it would seem, are not pointless after all. The narrator, for all his blustery pomposity, knows this too. The careful consideration of other worlds and means of creation, the search for meaning in what has been done and what may yet occur, is not a meaningless pastime but rather the lifeblood of intellectual life. Menard may not have fulfilled his ambitions, but in sparking such considerations and discussions he—and Borges, his creator, and Cervantes, his muse—have succeeded nonetheless.

The greater truth is that Menard need only exist in our minds for his efforts to be real and meaningful. To consider an existing text in a novel light requires not that it be rewritten, as Menard so ably and fictionally attempted, but only that we read it with clear, present eyes. “Shall I confess that I often imagine that he did complete it,” asks the narrator, “and that I read the Quixote—the entire Quixote—as if Menard had conceived it?”

So should we all.