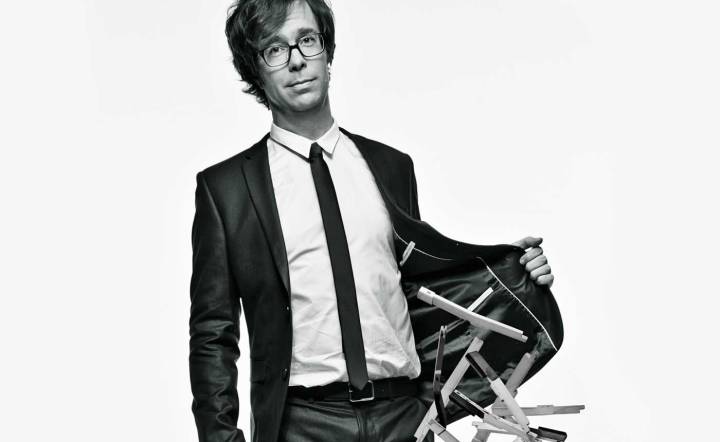 In the 22 years since “Brick” made him a recognizable figure in pop music, Ben Folds has explored his art in an awful lot of ways. He’s recorded albums with his band, as a solo artist and with William freaking Shatner. After he unexpectedly became an a cappella icon, he hosted a singing competition with blog-favorite Sara Bareilles. He’s contributed to film soundtracks and worked with novelists and chamber sextets. Through all of this, Folds has often portrayed himself as a light-hearted comedian but the truth is that the most resonant moments in Folds’ catalog are heavily colored by his willingness to address the pains inherent to an average life. To wit: His most successful single was about abortion.

This isn’t to say that Folds is a strictly cynical figure; the hemorrhoid jokes in “Rockin’ the Suburbs” may inspire a chuckle, he was undeniably charming on The Sing Off and songs like “Gracie” and “The Luckiest” are legitimately endearing. But there are other musicians funnier than Folds or who have found more success as television hosts, and as moving as his may be, there are too many love songs in the world for his to set him apart in any material way. What Folds does better than anyone else is capture the subtle pain of banality, the agony of a life whose failings are unspectacular but impactful all the same, like a headache that never rises to the level of excruciating but instead throbs with constant, persistent irritation until it becomes unbearable.

Admittedly, much of Folds’ work tracks a distinctly white male mindset that will be less than appealing for some but, as a white, middle-class male, it’s a perspective that resonates with me. When, on “Evaporated,” he sings “Started thinking about my old man. It seems that all men want to get into a car and go anywhere,” Folds is speaking an oddly specific truth about feeling trapped in a life that you’ve made and which you also know that you can’t quite control. Even as a teenager with limited responsibilities, that line spoke to me in my own voice, with my own truth. And as I age, songs like “Hold That Thought” and “I’m Not the Man” seem ever more perceptive; the former confronts the way that larger failings grow out of our smaller flaws while the latter engages with the natural disconnect between how we consider our selves and how we are perceived by others. Both songs lament the loss of a joy that might never have existed, an echo of the deeply American tendency to wistfully long for the “good old days.”

These songs, like most of Folds’ best, establish a certain amount of blindness to the world at large, turning narcissistically inward to investigate what it means to be alone in the prison of your mind, the prison of your life. They seem to invoke a quote from Folds’ contemporary, David Foster Wallace, who once noted that the chief horrors facing his generation were “anomie and solipsism and a peculiarly American loneliness: the prospect of dying without once having loved something more than yourself.” That type of self-involved reflection can be seen clearly in the song “Mess” wherein Folds sing, “But I don’t believe in God, so I can’t be saved. All alone, as I’ve learned to be, in this mess I have made.”

Perhaps the most precise example of Folds’ ability to capture the tragedy of an anonymous life occurs in “Fred Jones Part 2”, a dolorous track from Rockin’ the Suburbs. The song follows the titular Jones as he retires or, more painfully, is forced out of his long-time job to make way for newer, younger employees. Jones, previously introduced through the haunting “Cigarette” wherein he struggles to cope with his wife’s debilitating illness, is a sharp avatar for the working class life inhabited by so many Americans. He drifts down into his basement to escape the pain of his personal and professional lives, hoping to find peace in the serene act of painting slides. But he’s not making anything new, just tracing the lines of a projection, an image that someone else—maybe a prior, more joyful version of Jones himself—has captured, and so he finds no comfort in the act. Instead, Fred is buried—he’s already underground in the basement, remember—by the crushing sense that he has wasted his life, that he has made nothing of his one chance at living. That perception permeates even his painting, which he notes “doesn’t look right” as the song swells to its musical and emotional climax: Fred’s cruel epiphany that “all of these bastards have taken his place.” That he’s “forgotten and not yet gone.”

It’s one of the greatest moments that Folds has ever written and perfectly representative of the ability that separates him from his peers. Acutely aware of his place in the world as a white man, formerly of the middle class, Folds understands the privilege of such a position and also the unsatisfying anonymity of it. He has mined the depths of the natural decay that eats away at middle America and, in doing so, come to understand the glorious, miserable poignancy of personal entropy.