The parking lot was filled with tailgaters and not a face in sight was younger than my suddenly youthful 32. This was the scene that greeted my wife and I as we pulled into Freedom Hill on a late June day, drawn to the site by the Summer Gods Tour, a nostalgic goldmine of an operation that paired ’90s alt-rock icons Third Eye Blind with emo-turned-dad-rock luminaries Jimmy Eat World. It’s fitting that everyone present at the concert that night was old enough to be a seasoned parent: The best Third Eye Blind and Jimmy Eat World albums—their glorious, thrashing offspring—are now old enough to have driven themselves to the show. One of them could have bought beer for the rest.

Time is rarely kind to rock stars—and no more charitable to those who celebrate them—so when Jimmy Eat World opened their set by ripping through “Pain,” a 15-year-old song with the kind of rage and aggression befitting an angsty 15-year-old, it was a welcome surprise. The rest of the band’s set was similarly satisfying; maybe Jim Adkins can’t hit all the high notes in “Sweetness” anymore, but Jimmy Eat World still rocks. And two decades of practice have smoothed that rock until no jagged edges remain; a far cry from the ragged collegiate shows that I grew up attending (and performing in), a contemporary Jimmy Eat World performance, with its tight harmonies, focused guitar tones and efficient light show, is professional.

Then again, aren’t we all at this point?

In contrast to the tightly refined performance of Jimmy Eat World, Third Eye Blind was sloppy and occasionally incompetent. I’m sorry, that’s not fair. Longtime drummer Brad Hargreaves was his usual phenomenal self and the rest of the current Third Eye Blind lineup was perfectly serviceable. Lead singer Stephan Jenkins was sloppy and occasionally incompetent, and that’s a problem when you consider that, with key cogs like Kevin Cadogan, Arion Salazar and Tony Fredianelli no longer associated with the group, Jenkins essentially is Third Eye Blind, a circumstance that is clearly not accidental. Having excised most of his creative equals, Third Eye Blind has become something of a cult of personality centered on Jenkins. That structure is always troubling for a host of reasons but especially in this case when the personality at the center of the self-styled cult is, well, I’ll let Jimmy Eat World drummer Zach Lind explain:

Stephan Jenkins is such a fucking creepy douchebag.

(I feel so much better now)

I’m not here to pile on Jenkins who was a part of some of the most important songs in my life and also appears to be an excessively unpleasant person to associate with. I am here to note that his live performances are typically exercises in strained vocals, marginal pitch control and bizarre motivational speeches. It says a great deal about the live Stephan Jenkins experience that, of the two front to back performances of Third Eye Blind that I saw a couple of years ago when that record was celebrating its 20th anniversary, the better of the two wasn’t by Third Eye Blind at all but by XEB, a group comprised of (you guessed it), ex-Third Eye Blind members Cadogan, Salazar and Fredianelli.

At 55, Jenkins hasn’t embraced the performative (or, seemingly, personal) professionalism of many of his peers and tourmates. He’s still out there, jumping and wailing like an overgrown tween, screaming into the void, desperately hoping to hear it calling his name back. And if Jenkins’ persona hasn’t matured in the 25 years that he’s been a notable figure in the landscape of popular music, the blind and unearned confidence of youth has remained in his songwriting as well. Screamer, released last Friday as the sixth Third Eye Blind LP, isn’t afraid to be raw and earnest and dumb. That unrestrained vigor can sometime pay off as songs like “Screamer,” “Tropic Scorpio” and “Light It Up” surge with energy even when their tempos slow. (It certainly helps that Jenkins has elected to bathe his vocals in harmonies, double tracks and gang vocals, filling out what had become a pretty warbly tone on the band’s last few releases.) Even “Ways”, whose lyrics are so terrible that I’m embarrassed by them even though I had nothing to do with them, kind of works in its weird, culturally appropriated way. Jenkins has pop music in his blood and even when he’s vampirically refueling from the young, his gift for hooks is undeniable. (Seriously though, he’s a vampire.)

And here’s the “but” that I’m guessing you were expecting. As much as youth culture might inspire him, Jenkins’ desire to incorporate it into his art often betrays him, carrying him painfully past the limitations of who he is. Screamer aspires to the carefree, surfer dude vibe that Jenkins has presumably been living in San Francisco all these years but songs like “Walk Like Kings” and “Got So High” aren’t fun and lighthearted, they’re bland. Even the enjoyable “Tropic Scorpio” is marred by the fact that it’s eerily similar to Dopamine’s “Back to Zero.” Jenkins may turn to contemporary youth culture for inspiration but when it’s time to write songs, he’s clearly flexing the same muscles that he’s utilized before and, for all his flamboyant concert theatrics, fatigue has started to set in.

Of course, any discussion of Jenkins’ reaching towards genres that lie beyond his abilities has to include his affinity for hip hop. Convinced that he has a background in the genre, Jenkins has been known to force “rap” (quotes definitely required) into Third Eye Blind tracks in the past, from the if-you-squint-real-hard-I-guess-it’s-kind-of-rapping verses of smash hit “Semi-Charmed Life” to the inexcusably disastrous passage hanging off the end of “Summer Town.” The band’s newest attempt at making it impossible to listen to an entire album without skipping a track is called “2X Tigers” and its horrifying riff on contemporary hip hop culture is so irritating that I’ve deleted the song from my Apple Music library in an effort to never hear it again under any circumstances.

To be fair, Screamer has exceeded my expectations but that’s only because those expectations, in light of live performances and recent releases, are so low to begin with.

Jimmy Eat World’s tenth full-length, Surviving, was released on the same day as Screamer. The album also tends towards a youthful sound but, unlike Screamer, Surviving doesn’t try to ape the music of today’s youth. Instead, the album sounds like a return to Jimmy Eat World’s youth, focusing on the straightforward guitar rock that characterized their hits from Bleed American and Futures. The professionalism that the band showcased live is evident on Surviving which sounds, well, professional.

Like fellow emo-turned-dad-rock stars Taking Back Sunday, Jimmy Eat World seem comfortable in the idea that they’re working musicians in the most literal sense: Their job is being a band. And so, dutifully, they head into the studio every few years and get to work utilizing their decades of experience being a rock band to write yet another extremely proficient rock record. Then they head out on the road and tour the country, doing an extremely proficient job at being a live rock band. But it’s not a coincidence that while on tour, hyping up a new record, only one cut from their 14-song setlist was from Surviving. Jim Adkins and Co. understand that, at this stage in their career, their past will always be more important than their present.

To be clear, none of this is meant as a knock on Jimmy Eat World. If you have to have a job (and I sure do!), then this sounds like one of the best that you could ask for. But if you’re looking for inspired songwriting, a band writing its tenth consecutive album of guitar rock is probably not the place to look. Surviving doesn’t have any bad songs but it doesn’t have any great ones either. In a way, it kind of only has one song—let’s call it, “Jimmy’s Guitar Rock Song”—that cycles through a few variations. There’s the fast one (“Criminal Energy”), the slow one (“555”) and the one with the inexplicable saxophone solo (“All the Way (Stay)”). They even included the one with the killer breakdown (“Congratulations”), following in the tradition of “Get It Faster” and “Pass the Baby.” 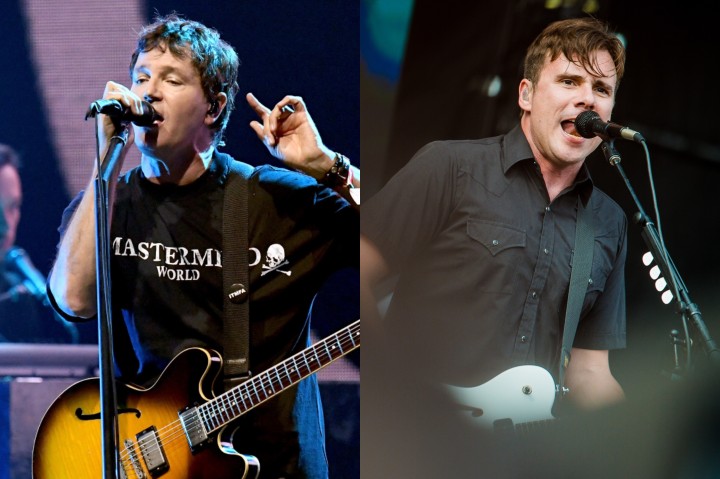 During the promotion cycle for Surviving, Jim Adkins told Apple Music that, “Anything we do has to be as good as the best thing we’ve done so far. Otherwise, why are we doing it?” It’s exactly the type of canned response that he has to give but the honest answer to his question isn’t the one he’s implying. The truth is that Jimmy Eat World keeps making records because that’s their job and that Third Eye Blind keeps making records because Stephan Jenkins’ ego won’t let him stop. And I keep listening and writing and talking about both because, after a lifetime spent thinking about these bands, that’s what I do, too.

Despite my tepid response to their new releases, I’m happy that Third Eye Blind and Jimmy Eat World are still making new music, if only for the opportunity to wax nostalgic on them for 1,500 words. I’ll keep going to see these bands live and listening to their new records at least a few times before setting them aside in favor of the more substantial and beloved releases of the past. Even as they march towards obsolescence, I can’t escape the reality that these bands helped me construct myself, and that contribution still remains worthy of consideration and discussion all these years later.